Halloween: Skanks' Get out of Jail Free Card!

Listen, I'm a classy gal. I'm southern, I like my pearls, and I'll make fun of the girls who walk by wearing stripper heels (obviously). I mean, you don't wear outfits that look like they came from a seedy Atlantic City casino's gift shop around me. I'll put yo' ass in my blog (literally since it's bound to not be covered).

However, there is one day during the year where even I can break the rules and dress like a hooker - Halloween. Here are the top outfits to take advantage of on the day where temporary whore-dresser is not only allowed, but encouraged!

1. Any Cute animal (think cats, kittens, and any animal making an appearance in Bambi)

believe that this staple costume was initially made famous by the advent of the Playboy bunny. And of course, most of us have seen the part in the movie "Mean Girls" that explains how a simple Halloween costume can be made out of lingerie and a pair of cat, bunny, or mouse ears. It's simple, it's sexy, it's purr-fect.

What you'll need: Any sort of lingerie will do. You can use a camisole and silk hot pants, a leotard, or the bustier/leotard combination. Fishnets and high stilettos are also necessary. Obviously, the ears are essential as are the whiskers and tons of makeup - think "cat-eyes." Tip: A little black skirt can be used if more coverage is needed.

Origins: Nursery Rhyme character who "oops!" loses her sheep. Adds to the blondeness of the character and as we all know, blondes have more fun. Ultimate sexy, but dumb protagonist of children's lit.

What you'll need: White lingerie, some pink ribbons for your hair, and a short skirt made out of gingham. Fishnets, tons of makeup (spackle), and extra points for a garter. Don't forget the staff. Although, if you're going out, check on the rules on bringing in props. They may make you leave it at the door and if you lose the staff, you'll just be dressed like a skank who's ready for a picnic. 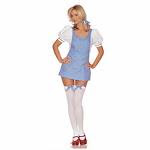 Origins: It started with the classic film "Barbarella," was followed by "Cat Woman," and was

most recently used in Britney Spears' "Oops I did it again!" video. Its curve-hugging and leaves nothing to the imagination.

Advantage: It'll keep you warming than most other costumes.

What you'll need: A gym membership and 2 weeks to starve yourself before you dare to venture out in public. Obviously, spackle. And maybe a whip?

5. Pre-packaged costumes with clever uses of the number "69"

Origins: I'm guessing that some guy who lives in his parent's basement in Naperville, IL came

up with sticking "Player 69" on the back of a midriff Cubs jersey for girls, packaged it with a pair of hot pants, and now sells it for $40-60 at Halloween costume shops nationwide. He probably still lives in his parent's basement, only now he drives a brand new Corvette instead of a busted Firebird. Other variations include (but are not limited to) "Troop 69" boy-scout, Sergeant Sexy the Police Cop, and a Referee (who loves foul play, it would seem).

What you'll need: $40-60 and access to one of the 8 million Halloween shops that open up temporarily in abandoned storefronts (later, they'll house Christmas decorations). Spackle. And hell, throw in some fishnets while you're at it.

Of course, there are many other variations of the fishnet/makeup/lingerie rule. Use your imagination. Start with a bikini or underwear and add on accessories until you have a costume. You could wear a green bikini, add ninja accessories, a green backpack, and go as a Ninja Turtle. Or, a gold bra, some chains, hair done in two buns, and you're Princess Leia!

A couple of pieces of advice: avoid standing on street corners for too long or you may be propositioned or arrested for pandering. Also, if you plan on staying out late and/or shacking up, bring a purse big enough for a change of clothes. You may be in costume, but you'll still be recognizable. And no one wants to do the walk of shame dressed as a Playboy Bunny or a Ninja Turtle.

See this original story the first time I wrote it, here.
Posted by Essodee at 10:47 AM

Why you hatin' on Naperville?