I'm Wearing a Shirt! Get Me Out of Here!

Man, that Spencer Pratt sure does know how to pull some ratings and get people to talk about him. Fools! Oh crap. That bastard tricked me! Apparently the Pratts caused some trouble on NBC's summer filler show "I'm a Celebrity! Get Me Out of Here!" Celebrity is a loosely used term on the show of course with a cast consisting of the couple famous for doing nothing, an American Idol reject, and a woman famous simply because her husband is a crooked politician from Illinois. Get me my autograph book stat!!! Note to producers: I bet Kathy Griffin wouldn't even do your show and she's on the D-List...

My favorite tidbit of info on Spencer and Heidi that I've read was Spencer comparing their celebrity status to that of Brad and Angelina. Riiiiight. But see, they actually have jobs and stuff. Awards, too. Spencer, you're not a producer and Heidi, you will never have a music career. Other antics included crying and much complaining but don't blame them - the devil made them do it.

I wonder if the devil made her wear this shirt as a dress... 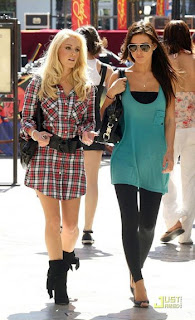 I try to stay away from them as much as possible. I am also fascinated by their stupidity though.