Didgeridoo'nt wear this as a dress...

A loyal reader in Australia sent in this pic, aptly titled "Lingerie and Heels." Sounds like a bad cop duo.

"Oh G'day mate - Who are those shelias fighting crime on the streets of Sydney?"
"Oh, G'day mate as well - that's just Lingerie and Heels. Blah blah blah shrimp on the barbie."

Isn't my Australian awesome? I totally worked at an Outback Steakhouse for a summer in college. Anyway, back to this picture of a bunch of shelias (not fighting crime - more like committing crimes of fashion) skanking it out with their bums hanging out (wonder how you say "skanking out" in Aussie? Anyone?) I realize that not everyone in this Shirtordress Gang is participating in the debauchery, but we've got some contenders in there. Namely, Boobs McGee in the front row. Seriously, I can see down under. Ah, c'mon! You knew I was going to use that one. 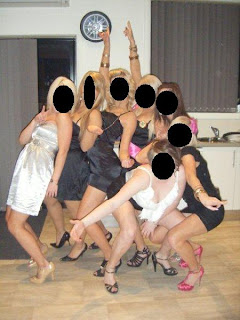 I LOVE YOUR BLOG!! Omg it has gotten me through a really boring long work day, and your sense of humor and voice really shine through in your writing. I was laughing silently at my desk at some of your commentary!! So awesome will check back every day from now on!!!