Occasionally, I actually step away from my computer and make an appearance in regular society Shocking, I know. With the weather warmer, it's impossible not to notice the scores of SoDs out there now and when I see blog material, it's hard for me to not try to get a picture of the offense. Which led to a little crazy seeping out this past weekend.

At a local beer festival, I was telling my friends JT and AB about my blog as well as my disdain for rompers. They were EVERYWHERE. These two already love to people watch, but they took it to a new level after this conversation. Also, Romper Drinking Game was created. JT spotted several SoDs including a particularly heinous one, and I pulled out my iPhone and went on a mission. Meaning I followed this girl halfway across the festival. I'm talking from Beer Station #4 to the stage. I blame Romper Drinking Game. And this is all I have to show for it. 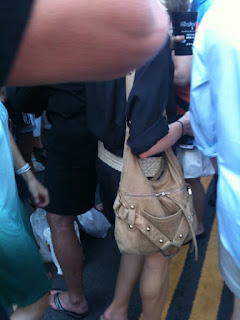 Total FAIL.Nice thumb. Just imagine a black dress shirt with a belt around the waist because that's basically all it was. HORRENDOUS.

Romper Drinking Game was DANGEROUS. But awesome. Which romper was the thumb blocking?

I can hear the conversation now.

"Really officer I'm not a stalker, you see I write this blog about women with poor fashion sense. Let me just pull it up on my iPhone and show you."

Seriously, how do people go to the bathroom in rompers? DO they have to pull the shirt part off and leave it hanging down the back, and then pull down the shorts part so the shirt part is either dipping in the toilet or dragging on the ground? There is no good outcome for dressing like that.

Living Fly on a Dime said...

Wow, just wow. I love when people feel adding a belt to a shirt makes it a dress. NOT