I can't decide whether I like Kesha's - oh, I'm sorry, I mean Ke$ha's song "Tik Tok." I feel like I want to vomit during the verse and dance during the chorus. Makes for an interesting scene on the dance floor to say the least.

My friend, Xtina, is obsessed with her song "Dinosaur," which is about Ke$ha's disgust with older men hitting on her. Hey, Ke$ha, you're the one who rhymed "swagger" with wanting to find boys who "look like Mick Jagger." What the HELL do you expect?? She is SOOO inconsistent. Anyway, there's also this: 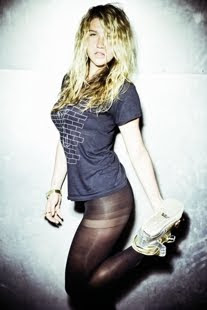 I guess pantyhose as pants is the new thing. May God have mercy on all our souls.

Homegirl needs a comb as well.

I feel the SAME way about her.

Thanks for sharing. Get the viral magical short video app Likee and watch the latest nontondramamu video and more!

Usually I never comment on blogs but your article is so convincing that I never stop myself to say something about it. i am Really very happy to say that this post is very interesting to read.You’re doing a great job Man, Keep it up. I blog at

Hi! Thanks for the great information you havr provided! You have touched on crucuial points! Top TikTok Songs

Brilliant innovative and gifted individuals that stamp ink. They can make pretty much anything work, yet ask a bad-to-the-bone cushion printer their contemplations on the computerized sublimation frameworks is frequently "that ghastly difficulty making machines can take a flying jump... " domain name